What is the Role of VR in Healthcare App Development?

The healthcare industry is just starting to tap into the potential of VR, and some of the early results are marvelously impressive. We examined some of these success stories, as well as the requirements for the application of virtual reality in medicine.
HEADSETS HEALTHCARE VR
Subscribe Back to blog
SHARE   |   0
Share
25%
Want to get more stories to your email?
subscribe

Over the past 20 years, we have seen some of the greatest historical medical breakthroughs take place, and many would not have been possible without timely technological advancements and upgrades. For example, robotic surgery became widely accepted, and a newly accessible version of MRI technology has allowed us to better examine and map the human brain, and the first 3D-printed organ replacements were produced.

There is a lot happening at the junction of technology and healthcare, and VR (virtual reality) technology is at the vanguard of these events. If we were asked to define virtual reality software, we would describe it as a program with simulated environments and scenarios, which can be accessed by anyone and anywhere in the world with the proper gear. The healthcare industry is just starting to tap into the potential of VR, and some of the early results are marvelously impressive. We will examine some of these success stories, as well as the requirements for the application of virtual reality in medicine.

VR applications are developed for many industries (with gaming being especially prominent) and tend to have a typical category of users, but medical VR apps have appealed to several categories of users, including patients, therapists, health administrators, surgeons, med school students, and ordinary people. There are a few modern examples of medical practices and niches that VR has successfully impacted and transformed. 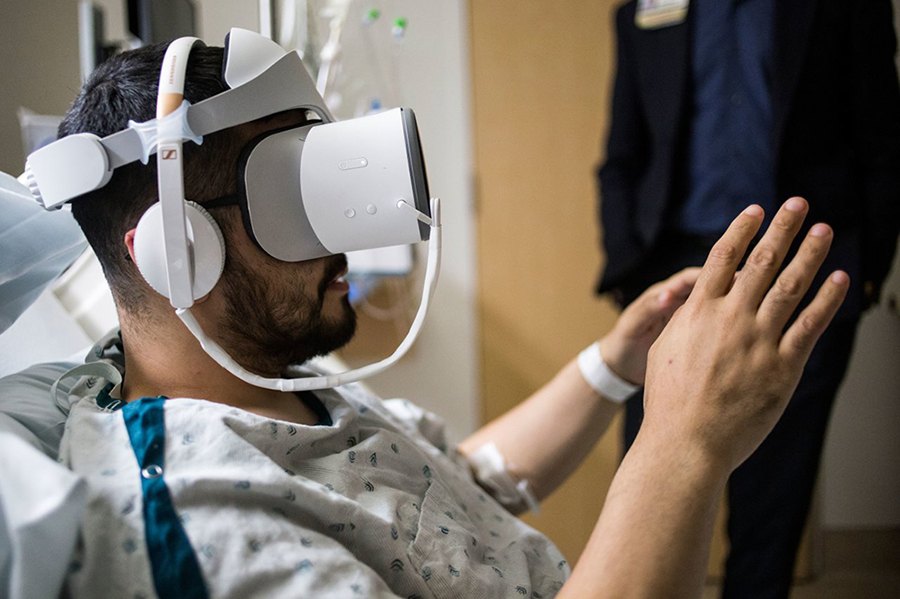 Dementia is a difficult condition to catch in its early stages due to the prevalence of a telling marker (cognitive decline) in other diseases and old age in general. However, a new study performed by Cambridge University achieved consequential results by applying virtual reality for health testing (checking for early signs of dementia). The VR test was focused on navigation, and the patients that took part moved through different areas, such as a field of grass and mountains. As it turned out, the VR test was much more efficient in identifying patients with early symptoms of dementia than the standard test practiced by doctors. In a separate study of virtual reality helping patients, researchers from the University of Kent found that giving dementia patients access to VR simulation helped them recall old memories and interact with their caregivers more meaningfully. Such innovative approaches are truly changing our preconceptions about where virtual reality is used and what can virtual reality be used for. 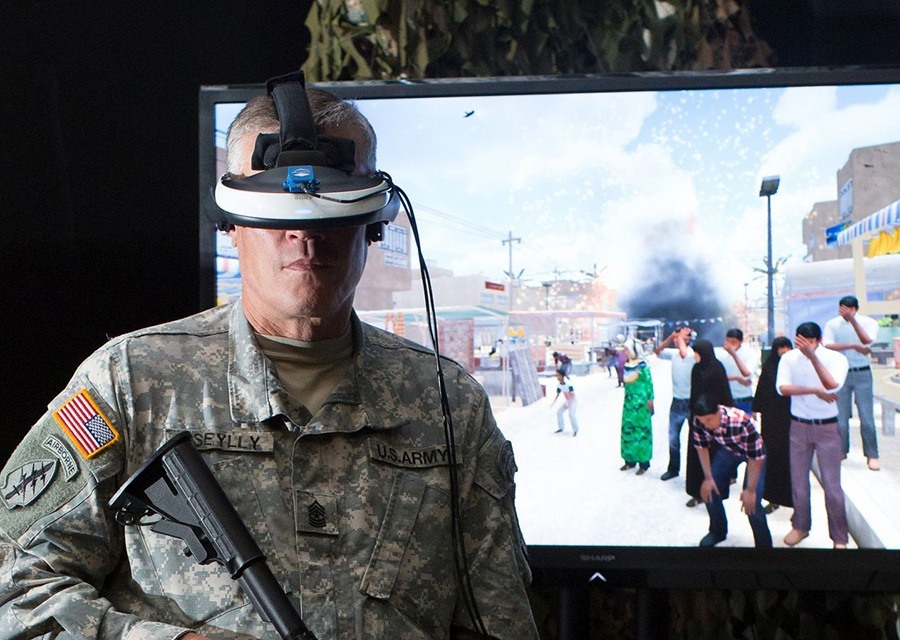 After returning from military service, many veterans experience PTSD (post-traumatic stress disorder). This condition manifests in many possible ways, including anxiety attacks and chronic pain. To address the problem from a new angle, researchers from Cardiff University (jointly with the Cardiff and Vale University Health Board) conducted a 2-year study focused on treating PTSD through VR in hospitals and other locations. The results included a reduction of PTSD symptoms in two-thirds of the patients taking part in the study. The pain aspect of PTSD was the focus of another virtual reality healthcare study conducted at the Cedars-Sinai Medical Center. In this study, participating in scenarios of virtual reality medicine applications was shown to affect patients’ perception of pain and make it more manageable. A more detailed analysis of the use of VR for patients undergoing rehabilitation is available here. 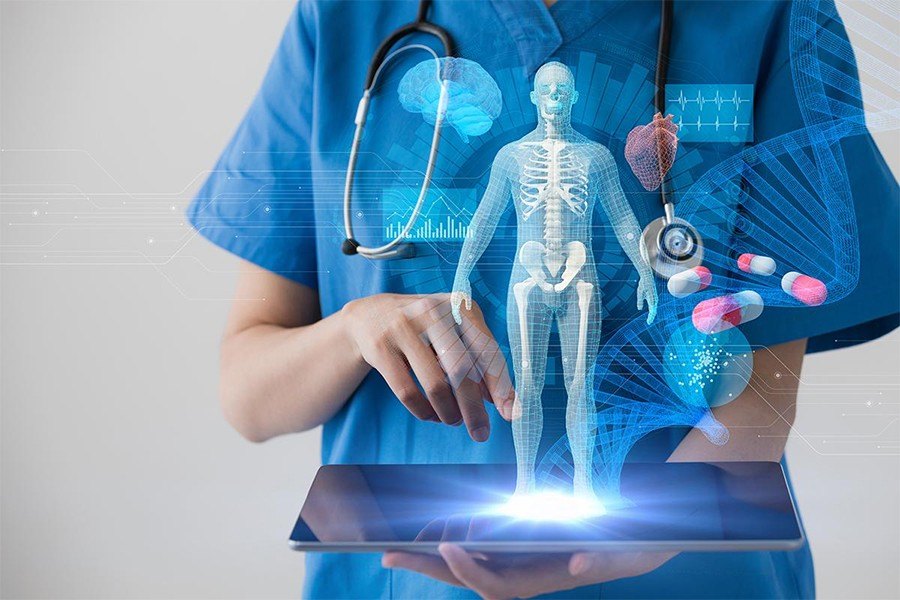 It is widely accepted that shining a light on and spreading awareness of health issues removes the stigma associated with them and gives people a better impression of what patients experience. There is no shortage of companies and clinics working to visualize health issues in VR, and we can mention a few examples. In Norton Children’s Hospital located in Louisville, Kentucky, neurosurgeons are using VR technology to create visualizations of patients’ brains and related VR health effects visualizations. The visualizations are created from 2D images (like MRI scans) and allow medical staff and patients’ families to examine the affected brain in detail and better understand the plight of the patient. Another prominent example of such targeted VR simulation is in consideration for use at the Eye Institute of Alberta. After testing a virtual reality healthcare simulation that mimics the experience of vision loss, some of the institute’s staff are hoping to apply this virtual reality medical use to give doctors, nurses, and anyone unaffected by vision loss an opportunity to understand it better. 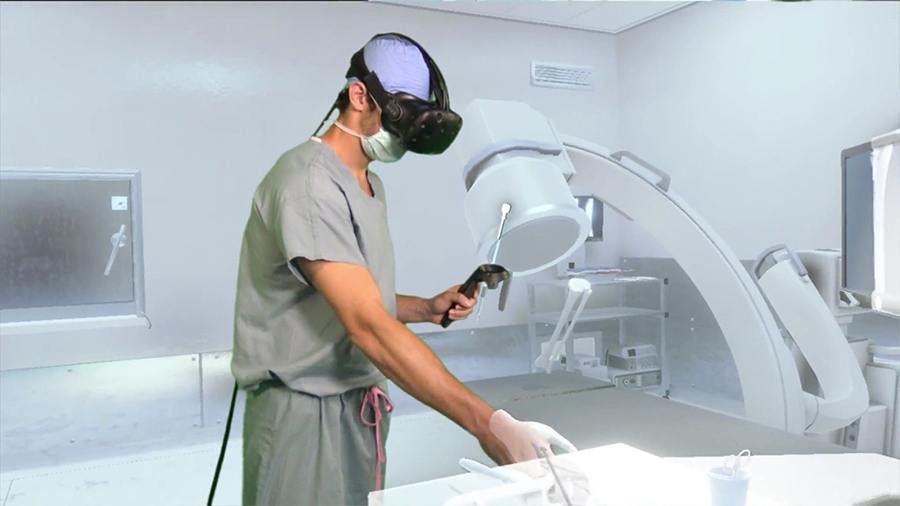 According to an article recently published in the Harvard Business Review, an estimated 30% of surgeons face difficulties with operating independently after completing their medical education. As you know, acquiring proficiency in some field usually requires knowledge and extensive practice. Although there are likely several factors contributing to the 30% figure mentioned above, we can infer that a shortage of practical experience is a major contributor. Hoping to combat this trend, the UCLA David Geffen School of Medicine conducted a study focused on training surgeons through VR. In the study, one group of surgeons-in-training trained for a complex procedure through traditional means, while another trained using VR surgery software. After their skills were tested, the virtual medical training group proved to perform the procedure both significantly faster and more efficiently than the other group that never used the medical training virtual reality app. This case is similar to a recent report about a radiologist from the UVA Office of Graduate Medical Education that helped create a VR experience teaching radiologists how to shrink lumps in the thyroid. 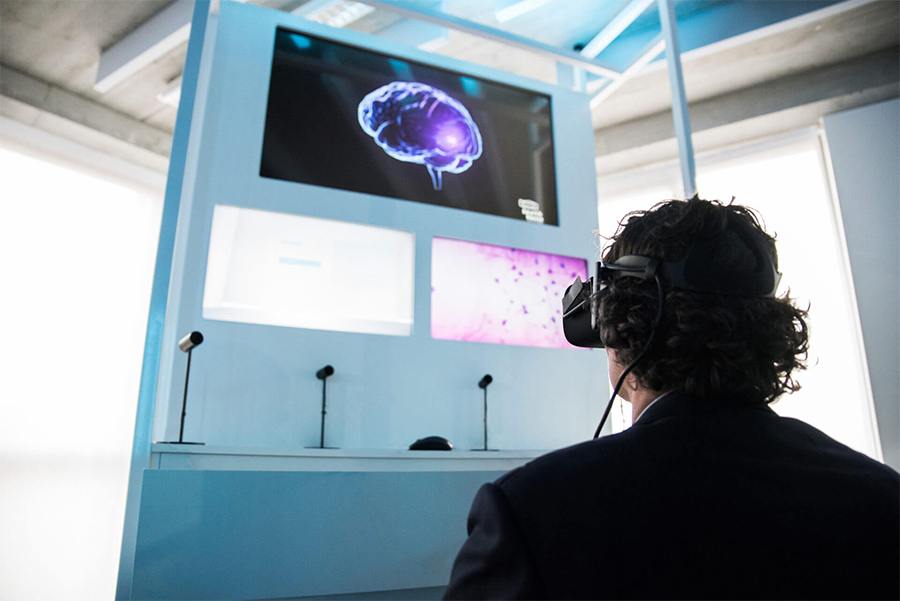 We have discussed VR visualization of different locations (i.e. an operating room and a grassy surface) and objects (i.e. the brain, thyroid), but there is another niche in medicine that VR is impacting – drug research. The substances and components of typical drugs are very small, so VR visualization greatly enlarges them and can allow users to modify and move them. For example, CNN recently reported on a British pharmaceutical company using virtual reality technology to develop new drugs and substances. With the technology, scientists see colorized and large visualizations of molecules and proteins, which they toy with until they create a successful compound. This approach to research has already yielded benefits, as the researchers made great strides toward developing a treatment for addiction, and are also working to develop cancer and Parkinson’s medicine. On the other side of the country, scientists at the University of Bristol are using the same approach – tackling drug development in the setting of virtual reality used in the medical field. Their virtual reality and medicine platform is cloud-based and supports complex actions like tying proteins into knots and threading molecules. 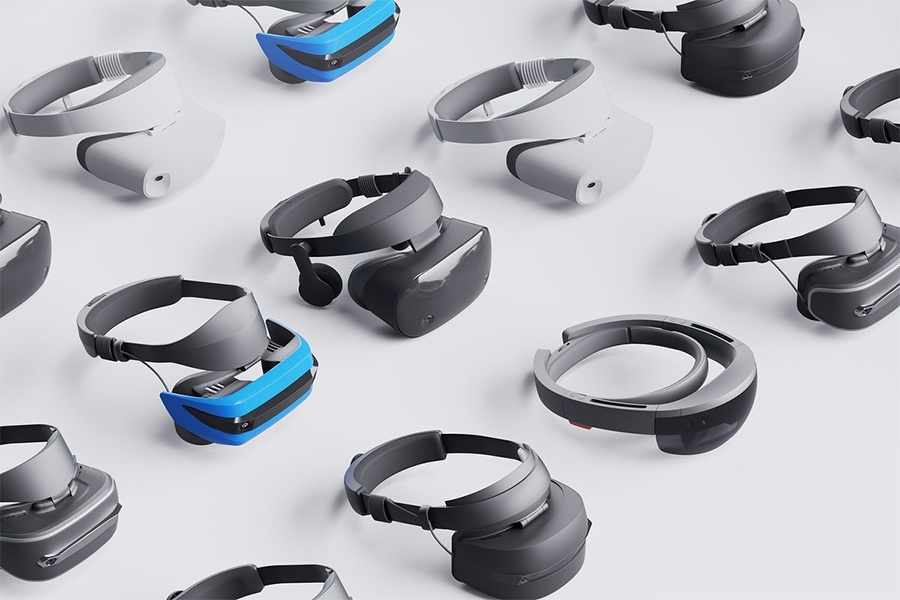 In our day and age, the market of virtual reality applications is thriving, but joining in the action is not as easy as some would assume. In order to develop and use a virtual reality simulation, there are 2 major requirements – proper hardware and proper software. In regards to hardware, the most popular options available today include Oculus Rift, HTC Vive, Gear VR, Cardboard, and PlayStation VR. These platforms are developed by tech giants (Facebook, Google, Sony, Samsung, HTC), and each has its own peculiarities. What unites them, however, is that they all feature a headset with the built-in option to display some sort of digital interface. For platforms like Gear VR and Cardboard, the visuals come from a smartphone integrated with the headset, while the rest of the platforms have their own dedicated visual interface, as well as additional controllers and accessories. If you plan to develop a healthcare VR application, you should first establish which hardware platform(s) you would like it to be accessible on, and direct further development according to this decision.

The development of VR software is in many ways similar to video game development, as the programs in both categories typically feature 3D models and objects. However, there is obviously a different mechanic at work in 3D simulation, and the way users interact with objects and the environment is also different. When it comes to VR hardware that supports motion tracking, haptic feedback, as well as gyroscopic feedback, any software that aims to take advantage of these features should also be developed with the code and allowances for them to work properly on top of the core functionality. This adds an additional level of difficulty to the process and is one of the reasons many software developers are reluctant to dive into the VR and Healthcare market. Still, for those that take the plunge, there is a wide variety of programs available to aid with the process, including Unity 3D, Unreal Engine 4, 3DS Max, SketchUp, and Blender.

Getting Your Project Done with a Healthcare App Development Company

It is one thing to come up with an exciting concept for a healthcare VR application, but bringing it to life is a whole other matter. Learning the basics of medical VR software development and healthcare mobile app development takes a lot of time, and getting started with the process can be very time-draining at first. For this reason, most companies and entrepreneurs with a desire to create a VR app of any kind turn to other companies that have experience with virtual reality and augmented reality in healthcare, skilled health app developers, and a portfolio of relevant completed projects.

Program-Ace is one of the many companies working in the field of VR software development, but our expertise also extends to other technologies and niches. We have an expansive staff of accomplished developers who are ready to help with your next project, whether it is full-cycle development or just assistance with a certain task or stage. Healthcare technologies are not new to us, either, and we can showcase several projects in this field, which make up a part of our sweeping portfolio. For example, the MoMedX application allows nurses and doctors to better manage their operations and appointments at work. This platform became a major success and has been implemented in more than 100 hospitals around the globe. 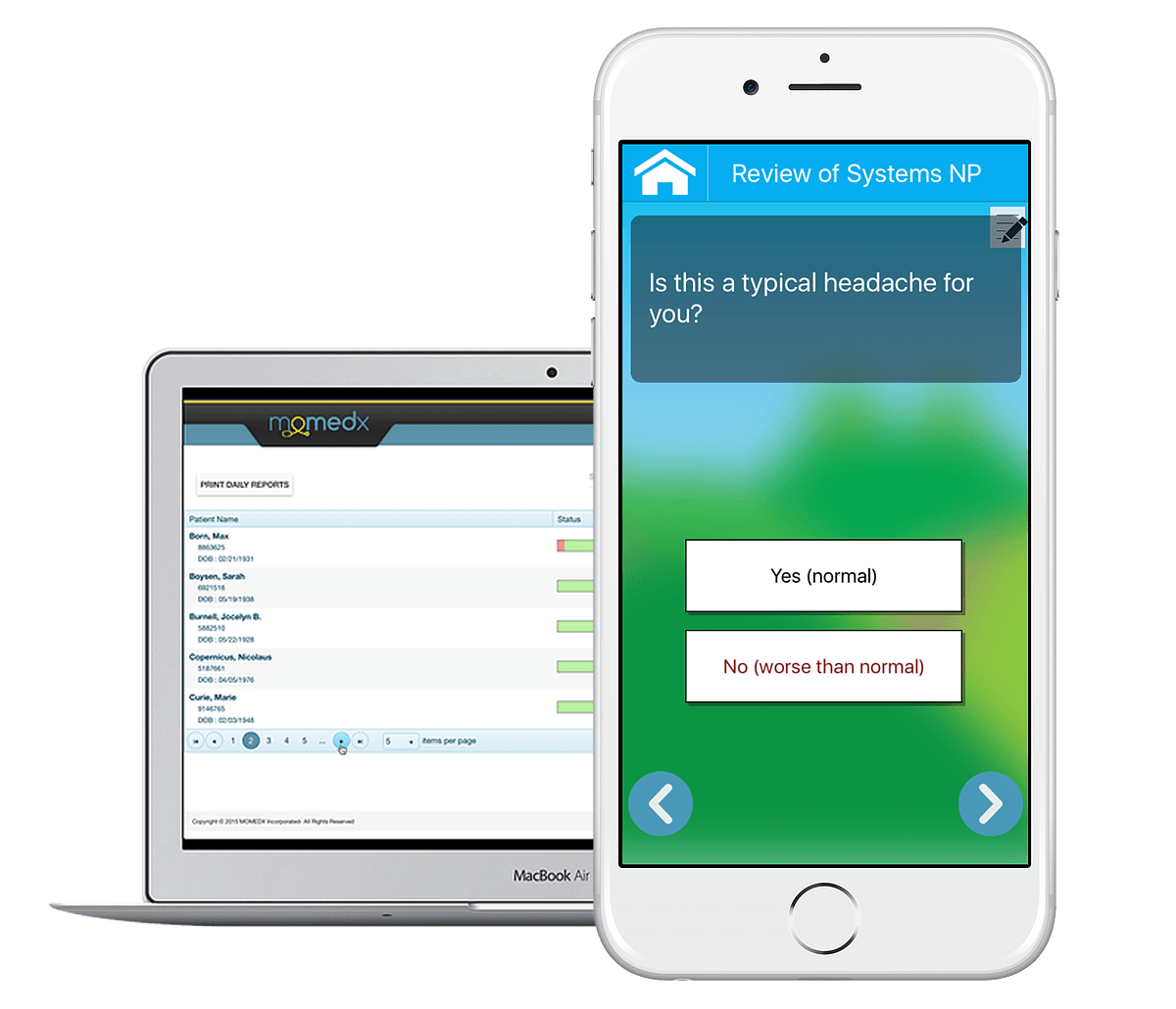 If you are interested in developing your healthcare app project alongside Program-Ace, or you simply want to learn more about our services and expertise, feel free to get in touch with us. We are open to discussing your vision, how it can be realized, and what the estimated cost will be. 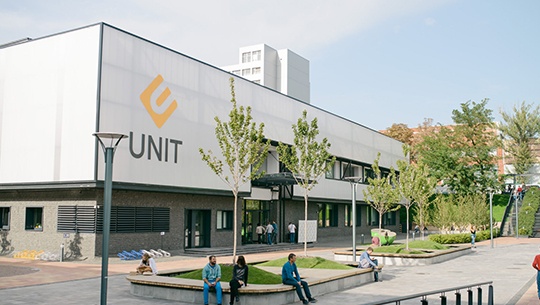 Program-Ace Will Speak About AR/VR Business Cases
Program-Ace is going to present AR/VR cases and speak the meetup “AR/VR in business. Cases overview” at UNIT.City innovation park on on June, 7
news
Read more 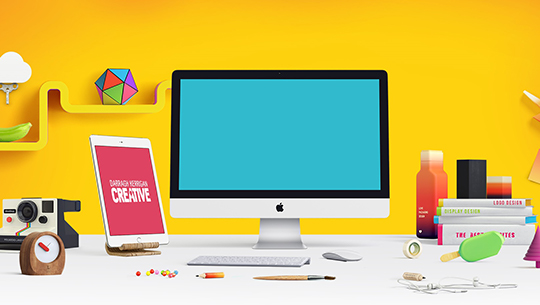 12 Web Design Trends To Look Into In 2016
Looking for new attractive web design solutions? Explore the most popular website's design trends that will be trendy in 2016.
insights research
Read more 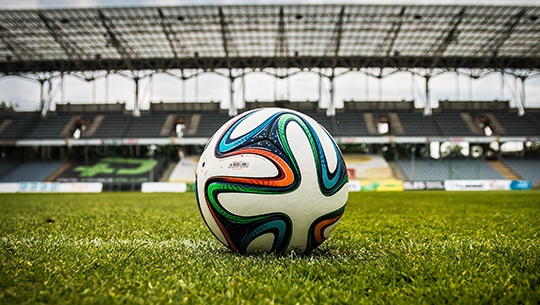