What Is Web3 and How to Play this Card Right?

In this article, you can learn everything you may ever need about the new internet iteration and start understanding Web3 from another perspective.
Web3
Subscribe Back to blog

With the advent of blockchain, the present-day state of affairs in the digital industry has experienced a never-before-seen transition. Web3 technologies are already here, yet we rarely witness their manifestations due to the lack of adoption, acknowledgment, and practical usage by large-scale corporations. Although in its infancy, the technology thrives.

The only question that arises in this context is what exact software solutions are here to stay and what is about to fade away with time. Nowadays, each Web3 development company aims to take advantage of Web3 solutions in order to provide more innovative services to clients.

Fortunately, in this article, you can learn everything you may ever need about the new internet iteration and start understanding Web3 from another perspective. If you intend to renovate your digital business or digitalize it, this reading is just for you!

Request a quote Our portfolio

The Evolution of the Web3 Technology 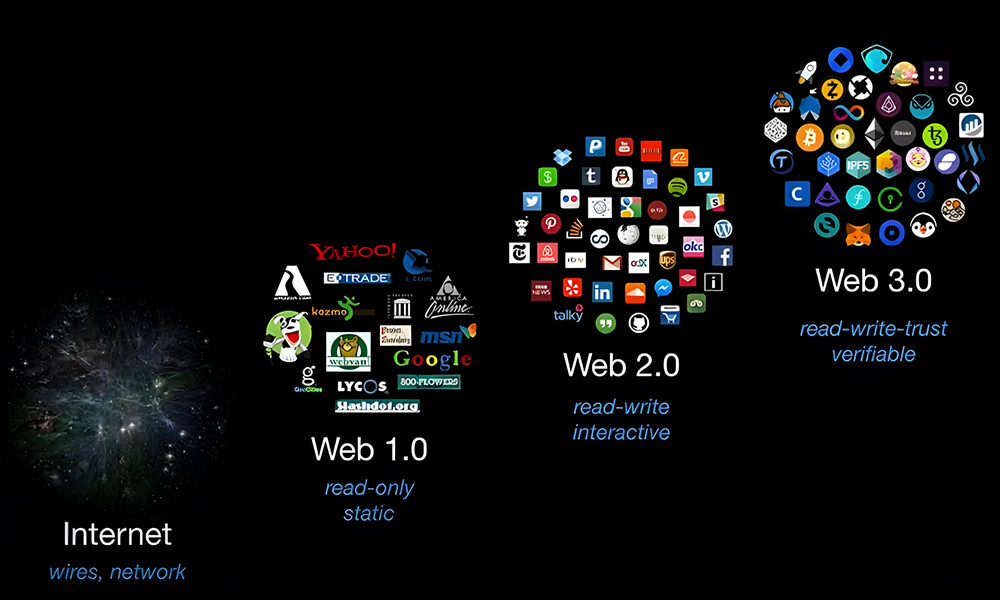 So, what is Web3 technology? In fact, the Web3 definition means it’s the next step in developing the internet, its so-called 3rd iteration. Since the very first website appeared in 1991 under the aegis of the Web 1.0 paradigm, there has been one more internet iteration — Web 2.0, which today dominates the internet. Therefore, from static websites in the 1990s, humanity is on the verge of reinventing the web using blockchain technology.

Before we answer the questions “What is Web3 technology?” or “What does Web3 mean?” more specifically and provide insights into how you can leverage it to boost your business, let’s reveal more about the history of how the internet has been evolving since its invention. This information will help you identify whether you need a Web3 transformation.

Before the 1990s, consumers regularly gathered at home to watch TV and listen to the radio according to a schedule. Only large companies or state-owned enterprises were able to offer reports, news, films, or other content via these media, with no feedback from the creators. Interestingly, the only way to analyze the audience’s behavior was limited to surveys as well as devices like Nielsen audiometers, which collected statistical data on TV viewing.

Historically, CERN employee Tim Berners-Lee invented the web in 1989. A year afterward, he created the first web browser. According to Cern, the browser was used to exchange information between scientific organizations and was soon introduced to the general public in 1991, with Berners-Lee posting the first website on the very first server. In 1993, CERN made WWW technology public domain.

With more and more static websites appearing on the web, its users quickly came to realize that the content that used to be exclusive and scheduled on radio/TV was then available at any time from any computer connected to the Internet. Back then, only simple resources could be accessed on the network, such as websites with ads, forums, online stores, and personal blogs. The ability to comment on content was limited to a separate guest page.

As the Web Design Museum claims, Darcy Dinucci was the first to introduce the term Web 2.0 in 1999. By Web 2.0, Dinucci implied the future of the web, where HTML-based technologies, along with hyperlinks, lie at the core of all devices, opening the door for clients worldwide to the web.

Then, in the early 2000s, came the mobile revolution, having provided humanity with pocket computers capable of recording and publishing various content. In addition, software-based public distribution tools have made it more straightforward for users to share their information across the web. Once the web became commercialized, many software service providers emerged, and the internet was owned by centralized organizations.

Although Web 2.0 significantly improved the quality of services offered on the internet, it made large-scale corporations more privileged, having given them the power to control the data of users. In turn, the activity of these companies is chiefly driven by financial ambitions, but they are fully subordinate to government agencies, which makes their operation legal.

What Is Web3? — Main Takeaways 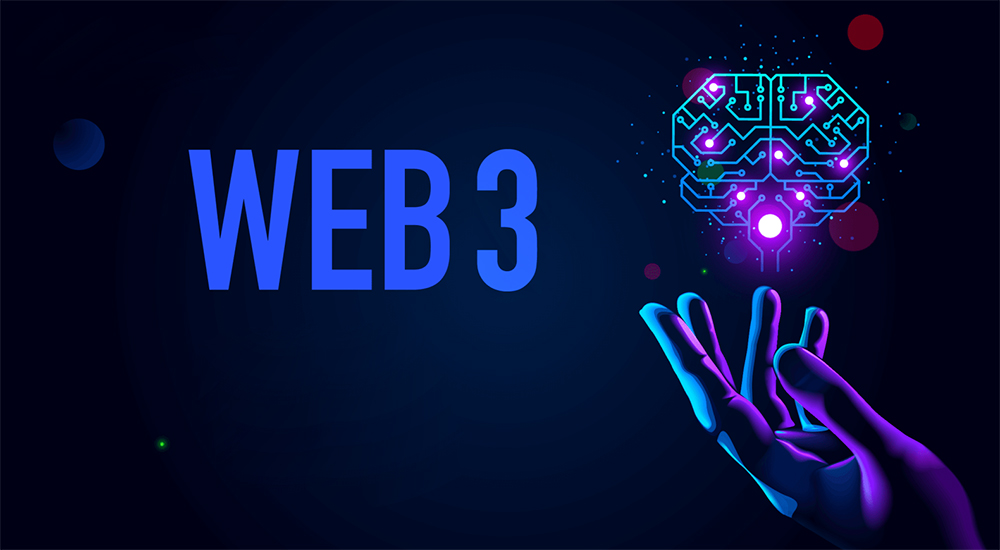 With Web3 explained, we can now move on to giving more insights into the topic.

Fundamentally, Web3 is a web infrastructure, the cobweb of several core technologies, including, of course, blockchain, machine learning, artificial learning, the semantic web, and the Internet of Things. Each of these solutions serves as an integral part of the future network with its specific role in the global ecosystem.

The Web3 concept first came to life in the 1990s. Berners-Lee referred to it as the semantic web. The architecture of the new internet iteration had to include a few fundamental constituents. In particular, there was the translation of all network content written in human language into a machine-readable format, thereby enabling algorithms and pieces of software to recognize the messages and construct connections based on them.

Nevertheless, at present, the perception of Web3 as a concept has undergone severe alterations. In 2014, Ethereum co-founder Gavin Wood published an article in which he outlined the Web3 paradigm as a more decentralized version of the web created using blockchain technology. Astonishingly enough, his ideas mainly touched upon the changes in the data storage system as well as increasing the level of user anonymity.

Even though both Web3 and Web 3.0 look similar enough in terms of naming (or even purpose), there is a considerable difference regarding what meaning these concepts convey. Notably, the two systems are to help developers build a more optimized version of the web by returning data control to users. Whereas Web 3.0 prioritizes intelligence and efficiency through reusing and linking data, the decentralized essence of Web3 focuses on cybersecurity and decentralization.

Nowadays, the global crypto community continues to seek a definition for Web3. However, its remarkable difference from Web2 presupposes the increase of decentralization, most often focusing on the way user data is stored and transferred as well as how applications are employed. Interestingly, decentralized applications (often referred to as dApps) are those having one or more of the following attributes:

Besides, Web3 is also characterized by an emphasis on artificial intelligence (AI) and machine learning (ML). This provides developers with ample prospects to personalize and enhance the user experience. Even though this principle underlies the business models of most large-scale web platforms like Meta, YouTube, or Amazon, the current web paradigm remains centralized at its core.

Since you already know the meaning of Web3, we can talk about its application prospects for businesses. The Web3 concept draws the attention not only of crypto enthusiasts or startups but also traditional Web2 players, such as Google and YouTube. Recently Google Cloud has announced the Node Engine to simplify the workload of blockchain developers.

In turn, Ethereum co-founder Joseph Lubin knows why web3 is important, so he pointed out that the new iteration of the internet provides new opportunities for decentralization. Also, YouTube intends to incorporate Web3 tools into its apps, while the Opera browser team is working to ensure support for decentralized applications at the native level.

The genuine meaning of Web3 and its power is that your professional activity is entirely transparent on the internet, with the same going for your competitors. Another advantage is that your clients and customers make more profit from using your software solutions, becoming shareholders as they purchase NFTs or other products from your marketplaces. That’s one of the reasons why we need Web3 — to rebuild user experience.

Need a consultation before developing a Web3?

What Can You Do on Web3?

With decentralization, your business can become peer-to-peer without any intermediaries, which can prove beneficial both to you and your customers. Web3 technologies allow you to launch NFT projects and games, blockchain-based metaverses, and other decentralized projects, thereby significantly expanding the scope of your business as well as influence.

In fact, everything you do on Web2 can be done on Web3, but in a different way. With blockchain technology onboard, this new internet iteration is more secure, transparent, user-oriented, and promising. If you want to improve your business, your choice may be a new metaverse that will combine all the products and services you offer to your customers right now. The only difference is they are all in one place and fueled by blockchain.

In Web3, websites and apps no longer run on a single server, with data stored in one database, which, by the way, can be relatively simply hacked, given talent, luck, and desire. With blockchain as the primary technology, your decentralized database is simultaneously stored on multiple devices interconnected within a global network. Web3 offers a far more reliable way to encrypt data. So your dApp will be more secure and provide more value.

The Future of Web3

As you’ve already guessed, the Web3 paradigm will put an end to the age of online payments using electronic cards that contain owners’ unique digits and confidential data. When Web3 dominates the world, people will use tokens instead of payment systems to pay for digital services. Conceptually, tokens will serve as an entry in a ledger distributed across the blockchain network, which is basically a crypto wallet (like MetaMask).

In the world of Web3, crypto wallets will allow you to pay for both physical and digital products or transfer finances anonymously. One of the vast benefits of this approach is that you won’t have to fill in too much data or leave sensitive information on different websites whose owners are unfamiliar to you. A one-time download or installation of the wallet will be enough to use whenever you want to purchase something.

At present, already-existing corporations like Meta can unilaterally restrict certain content or block as many accounts as they consider to be violating their code of conduct. In contrast, decentralized apps can just reject an attempt to restrict any kind of content from other users, inasmuch as this action will likely collide with the rest of the nodes inside a blockchain. Ultimately, the future of Web3 is still somewhat vague yet incredibly promising.

Indeed, the transition toward the Web3 paradigm will undoubtedly take some time, remaining a multilayered and expensive process. Nonetheless, the prospect of such an evolution is likely to provide users with much more freedom and prospects on the internet. In order to put all your potential to good use, consider finding a reliable custom software development company. Program-Ace can become your guide to the world of Web3!

Just contact us for more information and discuss your ideas or project details with our specialists. Together, we can find unique solutions to any issues.

No votes so far! Be the first to rate this post.